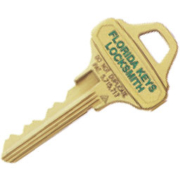 Description Of Locksmith Services:
There were 3 attempts of break-in through my side French doors even though I had standard dead bolts. Someone had used a “Bump Key” and unlocked the deadbolt. The only reason they did not come in was due to a swollen door at the bottom. They gave up and probably ran. The door had full view access from the busy Main Street and sidewalk area. After realizing that I had not forgotten to dead bolt them I called Florida Keys from a neighbors referral. She had talked to him several months prior and was very impressed with his knowledge of home security and locks. Not only did he spend 30-40 minutes on the phone explaining home security with differences in locking systems upon arrival he spent another 1.5 hours assessing the 4 exterior doors along with discussion of the 3 types of systems along with their costs. I’m impressed with Jim Hagen’s expertise, professionalism and NON-pushy personality. Yes the overall amount I spent was more than expected however it is an investment of home security, safety for me, my home and my pets.

He installed 4 exterior high level commercial security locks. I had an inappropriate existing interior kitchen door leading into the garage. Jim suggested not replacing that lock until I could have that door replaced with a solid wood or metal door. I intend to have that door replaced. At that time I will have Jim return and transfer the outer garage door high security lock to the kitchen door. In other words he saved me money by explaining that it would not be useful to replace 5 doors because of the type of existing kitchen door. I only replaced 4. Even though there will be another travel fee and smaller transfer fee in the future I appreciate his honesty which saved me money. In addition he gave me valuable tips on home security about lighting, keeping the old locks if ever I move. Since I have made an investment with these type of locks I will remove them if I move and replace the original standard grade. I appreciate all the advice and knowledge supplied by Jim and his company.

Description Of Locksmith Services:
I called at 9:30am on a Sunday morning. My sister (lives in Palm Harbor) was out of town, and her 20yo son was home alone. An ex-friend of his who was angry attempted to cause a problem by announcing a party at my nephew’s house the night before on FB. Luckily, several of us saw the notice and intercepted, but my sister and her son realized this kid used to have a key to their house and probably still does. She called me early Sunday morning and asked if I could help him get the locks changed before he went to work Sunday afternoon. I called Florida Key and left a voice mail at 9:30am, with a message that it was not an emergency but that I would like get the locks changed that day if possible.

Jim called me back within 15 minutes. I explained the situation, he was very nice, and asked if he could meet me at her house between 11:30 and 12noon. My sister wanted the deadbolts and knob locks changed on two doors that all used the same key. He showed us the locks and how he would change the cylinders out, then when one of the deadbolts that had not been used in a long time was frozen he showed us how it would not work and why he could not remove the cylinder. We asked him to just change out the entire lock and key to match the others, which he did. He even had two different deadbolts on the truck and went through the options of the two with the differences in price point and warranty and such.

It took a bit over an hour to change the cylinders in three locks, and completely change out the lock of another. He gave us two keys and made us extra at our request. He was very nice, extremely knowledgeable, and the price was fair. The Sunday service call to Palm Harbor was $68, each rekeyed cylinder was $21, and the new deadbolt that was replaced was $100. Each extra key after the first two free were $3 each. He was fast and efficient, and clearly knows his job. I would (and will) call him.